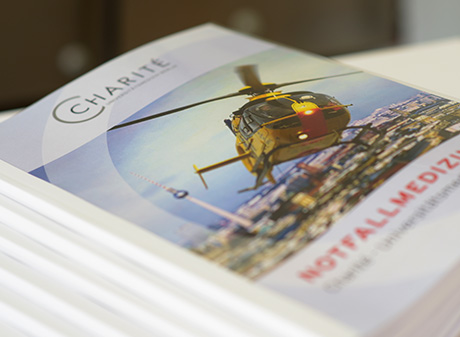 Tsunamis in the Brain: What do migraines and stroke have in common?

Stroke and migraines are diseases of the nervous system, whose emergence, course and prognosis differ largely from each other. Recent research findings indicate that both diseases have one central mechanism in common: electrochemical waves of enormous proportions that wander from nerve cell to nerve cell over large portions of brain tissue. Scientists at Charité – Universitätsmedizin Berlin have now compiled their latest research findings in the professional journal Neuron*.

Approximately 30 percent of females and around 8 to10 percent of males in the general population develop migraines over the course of their lifetimes. This condition is accompanied by disturbed sensory perception in approximately one third of patients. In such cases ─ prior to the onset of headache ─ the blood flow in the brain increases threefold. This is explained by the emergence of a catastrophic failure of electrical function of nerve cells. In a tsunami-like fashion this failure spreads from neuron to neuron throughout large portions of the cerebral cortex. Perceptive disorders can occur if the wave invades areas of the cortex that mediate sensory perception. Clinical studies conducted over the past few years reveal that these tsunami-like waves also occur in the context of stroke.

Scientists at the Charité conducting research as part of the international research network COSBID, together with other working groups in Europe and the United States, are investigating the causes and effects of this neuronal phenomenon. Waves of this kind have already been identified in hundreds of patients. The waves invariably emerge in the context of large hemispheric strokes, in 70 to 80 percent of patients with ruptured aneurysms, i.e. bleeding from a large arterial vessel at the base of the brain, as well as in approximately 60 percent of patients with serious traumatic brain injury. It is remarkable that the excitation wave almost never causes cellular damage in migraine patients, whereas in tissues with previously impaired metabolism, in stroke for example, it can trigger cell destruction that migrates across brain regions.

Prof. Dr. Jens Dreier, Head of the Working Group "Translation in Stroke Research" at the Center for Stroke Research of the Charité (CSB) and member of the Bernstein Center for Computational Neuroscience Berlin explains: "More than 70 years ago, the Brazilian neurobiologist, Aristides Leão, had already postulated that the migraine aura might be caused by a giant wave in the brain, indeed one that is five times larger than the discharge of nerve cells that occurs during an epileptic seizure." Prof. Dreier, who within the COSBID Consortium coordinates the "Subarachnoid Hemorrhage" project, adds: "We have since been able to identify this giant wave in a series of brain diseases. As opposed to migraine patients, in other diseases this electrical disturbance of the nerve cells causes brain vessels to constrict in an extreme manner. As a consequence, instead of increasing, the blood flow decreases, contributing to the destruction of brain tissue". The scientists are currently addressing the question of how the discoveries of the past years can now be translated into new diagnostic and therapeutic concepts.